By on in Articles, Historical Documents

Josie Doherty was born on 5th  October, 1899[1]; he was christened Patrick Joseph.  He was the only child of Edward Doherty and Mary Regan. His parents spent some part of the year in Scotland and he lived most of his time with his grandparents,  Owen and Bridget Regan,  née Horan,  in Cullentragh.  His first cousin,  Pa Monaghan,  was also reared by Owen and Bridget Regan. He went to Cuilmore National School which seemed to be some kind of republican academy.

Doherty  joined the Newport Company of the Volunteers about 1918 and was sworn in to the IRA in 1919. When Ned Lyons was captured in October, 1920,  Josie became O/C of the Newport IRA Battalion. He joined the West Mayo Brigade Active Service Unit in March,  1921. He was in the raiding party which shot Sergeant Butler in Newport on 18th May,  1921.  He did not take part in the Kilmeena Ambush on the following day but appears to have joined the Column in Skerdagh. He made good his escape from Skerdagh when the Column was surprised by the RIC on 23rd May and made his way with the Column to Glendahurk in the Tiernaur area.  They joined the rest of the Active Service Unit at Owenwee a few days later. Doherty took part in the Carrowkennedy Ambush on 2nd June. Between the Truce in July, 1921, and the Treaty in December of that year, he took part with the Newport Battalion in a training camp at Sheaun Lodge in Ballycroy in early September.

In October,  1921,  Doherty  resigned as O/C of the Newport Battalion to join the Connemara Brigade during the Civil War. He was vice O/C of the Leenane Battalion on 1st July, 1922[2]. He may have gone to Leenane to work for Petie Joe McDonnell in his coachbuilding business. Brian Corrigan in his unpublished Memoir to Family on p.  52 says that Josie had a flying column in Connemara during the Civil War.  His pension application is not yet online so we are not sure of his activities in the period. He had an IRA pension which covered the period up to September 1923.

When the Civil War was over Josie Doherty  went to the United States with his mother. He settled in New York where he married and had a family of four:  Jack, Pat, Christina and Maureen. He never returned to Ireland until 1967, when he came to Dublin and bought a house. His wife had intended joining  him but she died before she had time to move to Ireland. He never came west and the Monaghans in Cullentragh did not know he had come to Dublin. But the Monaghans heard an SOS on RTE Radio in 1973 looking for relatives of a man who had died in Dublin. From the description given the Monaghan’s realised it was Josie Doherty.  The Monaghan family made contact and took Josie’s body to Newport. He was buried in Kilbride Graveyard in September 1973, in the Regan family grave. 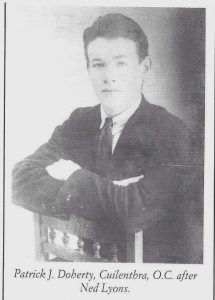