By on in Articles, Historical Documents 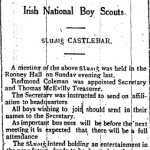 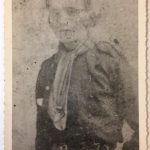 One of  those involved in setting up the first Slua or company of Na Fianna Eireann in Mayo, ‘Sluaigh Castlebar‘, on Sunday September 13th 1914 was Tom Mac Evilly ( 1899-1976 ) from Thomas St., Castlebar at a meeting in the Rooney Hall. (1). He was 15 years of age. At this first meeting Redmond Coleman from Tucker St., Castlebar was elected Secretary and Thomas Mac Evilly Treasurer and affiliation was requested from Fianna Eireann HQ in Dublin (2). At the next meeting a week later Redmond Coleman was elected Leader.

Tom Mac Evilly was a brother of Seamus Mac Evilly later killed in the Kilmeena Ambush on 19th May 1921. Seamus had  joined the Castlebar Fianna Eireann in 1915 and subsequently A Co. Castlebar Batt. Irish Volunteers.

The Castlebar Slua of Na Fianna operated independently of the Irish Volunteers Company formed there a year later, while the Westport branch of the Fianna, Slua Padraig Sairseal, was formed in July 1915 by Tom Derrig, later O.C. of the West Mayo Brigade, and after discussions with Tom Mac Evilly in the months previously, despite a similiarly named slua, Slua Patrick Sarsfield being already in existence in Dolphins Barn in Dublin since 1913  although this was later changed to Slua Brian Boru.

Up to then, It was customary for the Castlebar Slua to go on route marches to Westport, 11 miles distant,  and partake in exercises in the area, thereby gaining the notice of the Westport boys. After the formation of the Westport Slua both the Castlebar and Westport Sluaite would often participate in joint exercises using Joseph MacBride’s farm at Streamstown near Westport as their base (3). Other branches created in Mayo after Castlebar  were Balla and Ballinrobe, while Stephen Donnelly then aged 15, with other local boys, founded a scout group in  Ballina later in 1916  which became fully affiliated with Fianna Eireann HQ in 1917.

On average there were 24 boys in the Castlebar Slua and within 3 years it had its own uniforms, a bugle band and later a pipe band. Members regularly paraded outside the Rooney Hall each Sunday, after last Mass, and then proceeded  to Blackfort for ‘ball firing’ and signalling exercises. Each scout had to provide himself with semaphore flags, a book and a pencil before starting out. Senior officers wore breeches and leggings while younger scouts wore a tunic and short pants. Later, at 7.30 pm there was a weekly instruction meeting in the Rooney Hall.

After  the Redmond ‘split‘ of Sept. 1914 the Castlebar Slua  later took the side of the Irish Volunteers and helped towards the purchase of 50 rifles from the Howth landing. At O’Donovan Rossa’s funeral to Glasnevin on August 1st 1915 the Castlebar Slua had the honour of leading the Fianna Eireann section of the parade under Dublin Irish Volunteer officers Gary Holohan, Eamon Martin (later severely injured at Broadstone Railway Station during the Rising) and others, having earlier filed past O Donovan Rossa’s body as it lay in state in the City Hall on Dame Street (4) but due to the huge  attendance inside Glasnevin  Cemetery the Slua had to halt  outside the entrance gates.

At one time Tom Mac Evilly described visiting Countess Markievicz, one of the founders of Na Fianna, in her house in Ranelagh, Surrey House, which was the unofficial HQ of Na Fianna for a while, for the purpose of the Castlebar Slua having target training in her garden or in the basement of her home. After 1916 while Madame Markievicz was facing courtmartial in Richmond Barracks, the iconic flag of Na Fianna “ An Gall Greine “ was stolen from her home by British soldiers. It remains in the Imperial War Museum to this day despite many requests for its return. It had been on a loan exhibition to the National Museum of Ireland during 2016, however.

Tom Mac Evilly acted as Adjutant of the Castlebar Slua for 3 years. Other Fianna officers in the early period in Castlebar were John P. Mc Cormack, John Gavin, John Hoban and the Chambers brothers James and John. On Easter Sunday 1916 the Castlebar Slua of Na Fianna paraded with rations,  notwithstanding Mac Neils countermand order and it reported to Volunteer HQ in the Rooney Hall in Castlebar the next day, Easter Monday, on hearing of the Rising . According to Darrel Figgis, who was living in Achill at that time, the Castlebar Volunteers were dissuaded  by a local priest from engaging in any military engagement then, as he later described in his book “Recollections of the Irish War “ (1927 ) p.143-146 . Tom Mac Evilly was then 17 years of age.

In an online treatise entitled ‘The Fianna Eireann in Westport‘ Eamon Murphy quotes James (Dalai) Chambers from A.Company, Irish Volunteers, Castlebar, as saying that ‘ in Castlebar some of the most radical younger members actually transferred from the Irish Volunteers to the Fianna following the Split ‘  (from the Irish National Volunteers in 1914) . And he also quotes Brodie Malone, a former Fianna Eireann boy from Westport and later resident of Castlebar as echoing the same sentiment ‘ despite the survival of the Irish Volunteer Company in Westport intact, the Fianna became the principal agent of radicalism there after the Split ‘. What is significant is that these two sluaite would later become the nucleus of the West Mayo Brigade IRA formed in March 1921. In a later memoir J. J. O’ Connell, while commenting on the selection of officers by the Volunteers said “ only the Fianna selected boys with the touch of iron essential for leadership  and Fianna officers were later to become the best Volunteer officers “(5 ) . In Feb 1914 Padraig Pearse said “ we believe that Fianna na hEireann has kept the military spirit alive in Ireland over the past four years and that if the Fianna had not been founded in 1909 ( in Dublin ) the Volunteers of 1913 would never have arisen“. The Motto of Na Fianna, “ Truth on our lips, Purity in our hearts , Strength in our arms ,” was reaffirmed in each successive Fianna Handbook published in 1914, 1924, and 1964.

At Seamus Mac Evilly’s funeral on Sunday 22 May 1921 wreathes from officers and boys of the Castlebar Slua Fianna Eireann accompanied the coffin, “ In proud and loving memory of our dear comrade Seamus from the Officers of the Castlebar Fianna .” A second wreath echoing the same sentiments  was sent “ from the boys of the Castlebar Fianna.” Later ,  in J. Leonard’s iconic photograph of the West Mayo Brigade Flying Column  “ The Men of the West “  taken at Derrymartin on the slopes of Nephin Mountain at 11.45 pm on 20 June 1921, a month after the Kilmeena Ambush, 10 of the 30 men therein were from the Westport Slua originally. It is not known how many in the photo were from the Castlebar Slua !

In the early 1930’s Na Fianna in Castlebar, hitherto inactive for some years, were reported by An Garda Siochana ( 3rd April 1934 ) to be parading outside the town under their leader Thomas Tunney of Mt. Gordan, in a letter to the Garda Commissioner ( 6 ).This was at a time when there was an upsurge in recruitment to both the IRA and the Fianna, after de Valera came to power. Ceilidhhe were being held in the local Town Hall for fundraising and in the annual Easter Sunday Comemoration 25 members of the local Fianna Eireann took part, 12 of whom were in uniform lead by Mr. Tunney.

Later the same year 30,000 Republicans attended the annual Bodenstown Commemmorations that included in excess of 800 of the Fianna  from 30 sluaite including Castlebar.  By 1936 however Na Fianna began to decline in membership and by 1936  they were declared illegal  having fallen foul of the Fianna Fail government, the Catholic Church  and indeed the people of Ireland themselves who had become tired of the previous decade of militarism ( 7 ). Three current Fianna members were later  to die in the Spanish Civil War. Subsequently,  in the post 1962 period following upon the Border Campaign and presaging ‘The Troubles‘ to come,  branches of Na Fianna were established or revived throughout the country, including Castlebar (July 1966 ), and up to battalion strength then in the whole of Mayo (8).

During the War of Independence Tom Mac Evilly joined the Irish Volunteers while working in Athboy and later G Company 3rd Battn. Dublin in 1920. Still an employee of the Midland and Great Western Railway he was transferred to Sligo in May 1921and almost immediately became Adjutant of A Company Sligo Town as most of the Senior Officers there were now on the run. After the Truce in July 1921 he was dismissed from his job with the MGWR for disobeying an order to give appropriate information to the RIC relating to the arrival of railway goods. During the Civil War he was interned in Longford Jail  from which he helped to organize the escape of 70 prisoners. On the 9th of December 1921 he was one of a small group of Republicans to storm the Free State garrison in SligoTown Hall, capturing rifles and some ammunition. In a counter attack led by a Comdt. Fallon a Free State soldier, Sgt. Skeffington, was killed. Subsequently Tom Mac Evilly and Frank Pilkington, a brother of Liam Pilkington O/C 3rd Western Division,  were arrested on suspicion of complicity in the attack on the Town Hall. He was interned in Finner Camp and in Feb 1923  was tried by a military court and sentenced to death. His brother Fr. Michael tried to intercede with Gen. Mulcahy on Tom’s behalf. Family lore states that on taking Tom’s file from a cabinet and noticing Seamus’s killing in the Kilmeena Ambush and that another brother Jerry was currently fighting with Anti-Treaty forces in Fermoy, Mulcahy is alleged to have said ‘Ye are a right family of Bolshies‘ , a pejorative anti-Republican term in common use then. While in Finner Camp, Tom was a fellow prisoner of Peadair O Donnell’s who was in solitary confinement there and also under sentence of death. He mentions Tom Mac Evilly in his book “ The Gates Flew Open “, an account of his experiences there. Tom was now transferred to Kilmainham Jail and thence to B-wing Mountjoy as prisoner 1394. During the last hunger strike there organised by Michael Kilroy, O/C of Republican prisoners, Tom was beaten into semi-consciousness in the basement by Free State soldiers resulting in a permanent loss of hearing in one ear. After Mountjoy he was transferred to Harepark Prison Camp in the Curragh from where he was released  on parole in March 1923 ( the Civil War  ended in April 1923 ) owing to the death of another brother, David, after a total of 16 months in prison. Amid some controversy both he and his brother Jerry ( died 1945 ) subsequently declined to accept IRA Medals and Pension on the grounds that they had fought for a Republic only. In later life he became C.E.O. , Sligo V.E.C.