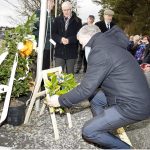 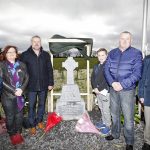 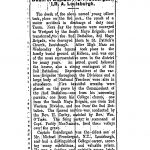 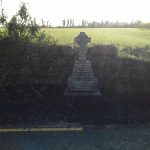 The Tragedy of War

Staff Captain Thomas Prendergast (otherwise known as Tommy Joe) was born to Michael & Kate Prendergast, Bridge Street, Louisburgh, County Mayo on 26th February 1902.  He died in an ambush in Blindwell, Kilconly on 3rd July 1922.  He was 20 years of age.

Tommy Joe died when the lorry in which he was a front-seat passenger crashed into a felled tree in Blindwell.  He was attended to at the scene by two neighbouring ladies, Mrs. Dunleavy and Mrs. Colleran and Mrs. Dunleavy’s son Willie Dunleavy, but the young soldier passed away within twenty minutes.

Tommy Joe’s body was laid out in Collerans (now Shallys) by Mr. John Concannon, grandfather of the Concannons of Cardiff, Kilconly and Ardour, Kilconly.  Mr. Concannon had experience of working with The Red Cross in the USA and was called upon by the Old IRA to attend to casualties.  It is reported that Tommy Joe’s body was laid out with great respect and on the following day his body was escorted by his comrades in the West Mayo Brigade back to his native Louisburgh. Captain Prendergast was laid to rest in Killeen Cemetery.

In the early 1940’s a monument was erected by Tommy Joe’s comrades at the spot in Blindwell where he died.  The monument was unveiled by Captain Pete Brennan of Ironpool, Kilconly.

Down the years, the monument became overgrown and dilapidated.  However, following on from the Kilconly Centenary Event in April 2016, and thanks to the great work of Mary Concannon of Ardour together with funding from Kilconly Development Association and local sponsorship, the monument has now been restored to its former glory.

It is now known that Tommy Joe was an outstanding academic and is documented as being a university student at the time of his death.  It is assumed that prior to attending university that he attended Saint Jarlath’s College in Tuam.

The story of Staff Captain Thomas Prendergast and the event in Blindwell will be recorded in the archives in Louisburgh Museum and will also be presented in their parish annual, An Coinneal, the oldest parish annual in Ireland.

The Blindwell event will be uploaded on to the Galway County Council Decade of Commemoration Website and together with the Centenary 1916/2016 event from Kilconly on 24th April 2016 will be archived by The National Library of Ireland.

May the soul of Staff Captain Thomas Prendergast Rest in Peace and may his memory live on.

I believe Thomas was the eldest son of Michael Prendergast NT born about 1861 in Accony and Kate Prendergast (b about 1873) nee Prendergast whose parents were Thomas Prendergast (1839-1907) and Bridget Kelly (1842-1892).

His paternal grandparents were Michael R Prendergast (1826-1866) and Mary Gibbons (1831-1901). His siblings were Margaret, Bridget, Michael F, Patrick J, and Fr Richard who served in Milltown and Mayo Abbey, died 1969.

Patrick J had a son a doctor, Dr James Prendergast in Preston, Lancashire.
I’ve a newspaper clipping about Thomas’s death described “as a result of a motor accident”.