I was captain of ‘A’ company, 4th battalion, West Mayo brigade on 11th May 1921. Myself and a section of the ASU which included John P. Sammin, Joe Fergus, James Sammin (Jim), Martin O’Reilly, Thomas Sammin, and Patrick Mc Namana. we were billeted in a disused house in in the village of Ashelane, when learning this house, and crossing through the Doughmakeon mountain, we were surprised by a force of the RIC and Tans, unfortunately we were crossing a valley of the mountain which afforded no cover other than a few turf banks. The Tans opened on us, I had only one rifle, three shotguns and one revolver. I seen our only chance was to engage them, which we did. The Tans immediately took cover in a drain and seemed relucent to leave this cover. I tried to get some of the men further up the mountain, which was craggy and hilly and would, as I thought, provide a good position. I got James Sammin (Jim), Joe Fergus and Thomas Sammin to keep the Tans engaged, while myself and the other men would get to the hilly position which was three hundred yards away. My intention was once I got there; I would be in a position to keep the Tans engaged until I got all the men to this position. The men I left to cover our retreat, unfortunately ran out of ammunition, during the time I succeeded in getting to the desired position. But a party of Tans in the meanwhile had surrounded the three men and captured them. I could have easily opened fire on the Tans but unfortunately, I wanted to xxxxxxx xxxxxxx. I and the rest of the men retreated into the mountains. I learned that evening that James Sammin (Jim) was injured in the arm. But not until the men came out of prison at Christmas 1921 that I learned the facts of how they got on. They told me after the last of their ammunition they buried their arms in a bog hole when the seen that there was no chance of escape.

Vincent Keane Notes: There were creases in the paper that Dan Sammin had used, and two or three words could not be made out. There were 7 men in that ASU, as far as I can make it out – 5 weapons between 7 men. He is not clear who had the weapons. Did the three men in the bog hole have 3 weapons? I got this statement in the brigade activity reports. It is Sammin and the statement was made on 12/2/41 in a solicitor’s office in Louisburgh. 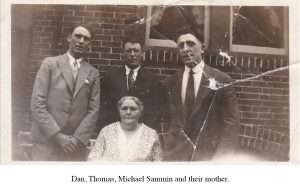