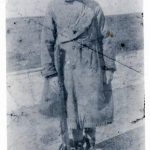 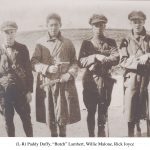 One of the heroes of the West Mayo Flying Column of the Old IRA was Paddy (Butch) Lambert a native of The Quay Westport. He was born on 11 March 1900 to John Lambert and Catherine Fagan, a native of Co Westmeath. He was a former pupil of St Columbkille’s School. He joined the Flying Column in 1920 under the command of Micheal Kilroy of Newport.

He was involved in all the Column’s activities against the Black and Tans and was credited with saving the lives of some of his colleagues on more than one occasion. Because of his strong links with FlyingColumn the family were target by the Crown Forces, his father and brother Thomas were tied up to a cart and forced to drag it through the streets of Westport and tortured. In February 1921 they raided the family home where upon his mother refused to tell them where he was hiding. They brought her down the stairs while her 15 yrs old son Paul was watching. She finally lost her battle with her injuries following November aged 56. Paddy played a leading part in both Kilmeena and Carrowkennedy Ambushes. After the conflict was over he workedon the docks at the Quay.