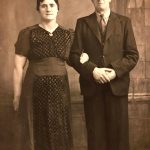 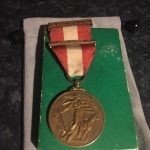 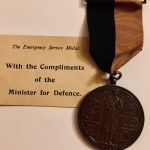 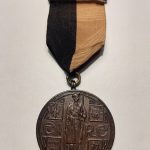 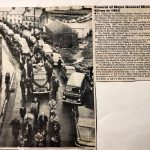 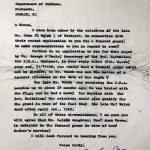 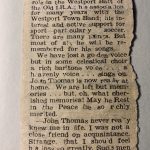 With the recent deeply regretted passing of John Thomas Walsh, another leaf has fallen from the once rich book of Westport’s treasury of music and song.  His was a glorious page full of the richness of a deep baritone voice, and more than that….. the voice matched the man.  The singing voice of John Thomas had a distinct and deep sincerity of feeling, there was warmth and charm in it, there was a sparkling spirit.  It was a window of the heart and soul of the man himself.

The loss of such a man must make Westport poorer in song… but his melodies and memories will linger on to enrich the lives and reminiscences of many, many people.  No matter who may sing such beautiful old songs as “The Old Bog Road”, “Love Thee Dearest” – “Moonlight in Mayo” – “Please Mr Conductor” – “Bless This House”, etc., their voice and personality will pale in memory of John Thomas.

When, in recent years, he won an award for the best individual singer in the Westport “singing Pubs” competition no surprise was expressed.  He was (Literally) head and shoulders above all others.  It was a small public recognition of his talent, yet on reflection, it was a significant achievement for a man of advanced years pitted against a wealth and variety of younger voices and modern songs.  The secret of success lay in the fact that no voice was “younger” or richer than that of John Thomas.  “Take a pair of sparkling eyes…” When he sang you listened to the sparkling vitality of youth itself.

His last public performance was fittingly at one of the Westport Senior Citizens Club Socials in the Town Hall, Westport.  Here, among his own there was a very special appreciation of his singing talent.  As the quiet and unassuming man filled the hall with melody, wrinkles and years seemed to peal off the faces of his listeners.  Eyes misted with memories…. Oh!  If only there was a “song without end”.

We have lost a golden voice but in some celestial choir a rich baritone voice…. A heavenly voice… sings on.  John Thomas is now really at home.  We are left but memories… but, oh, what cherished memories!  May he Rest in the Peace he so richly merited.

John Thomas never really knew me in life, I was not a close friend or acquaintance.  Strange, that I should feel his loss so greatly.  Such men are rare that leave such an impression and memories.