Mr. John McGovern Cloondaff, Glenhest, Newport. born June 1873 was a Postmaster, merchant and farmer. All his life he had been fighting for Ireland, while still in his teens he joined the revolutionary movement and trained in military tactics.

A member of the IRB and Headcentre for his district, he swore into the ranks many a good and true man in the eighties.

He was active in the Land League and United Irish League. Instrumental in establishing a first-class Fife & Drum band. President of the local branch of the Ancient Order of Hibernians, he did a man’s share in the fight for national and religious liberty.

He was organiser and instructor of the first band of Irish Volunteers established in the district. And the IRA in their struggle for national independence had none more consistent friend and supporter.

In the dark days of the Black & Tan War he was a tower of strength, his house being a rallying point and shelter. After the battle of Skirdagh the Auxiliaries raided and looted his premises, his life being saved in the most providential way. Recognising him after raids in Newport, they fell upon ______ leaving him for dead on the street and on the third occasion they did put him against the wall for execution when a humane officer arrived and saved his life. After this John went on to continue the fight for Independence but little more is known unfortunately 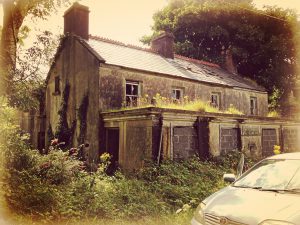